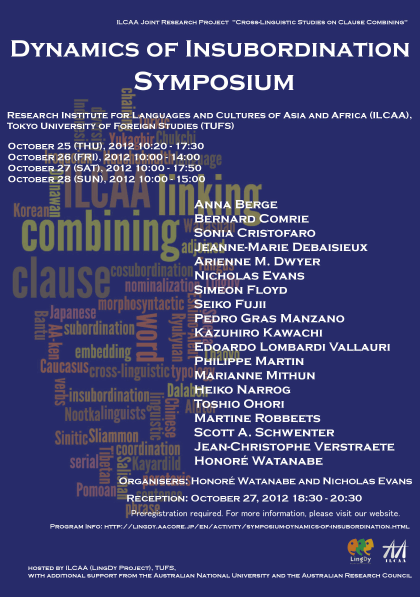 *This event has already been held.

The phenomenon of insubordination (Evans 2007) has emerged in recent years has a fascinating point of intersection between many issues, across a wide range of languages. It can be defined diachronically as the recruitment of main clause structures from subordinate structures, or synchronically as the independent use of constructions exhibiting prima facie characteristics of subordinate clauses; the term ‘suspended clauses’ has also been used for the phenomenon (Ohori 1996, 2000).

Insubordination phenomena have begun turning up in many languages from around the world where they had not previously been reported, such as Tlingit and Sliammon Salish in the Pacific Northwest (Cable 2008, Watanabe 2009 ), thesis-length studies of insubordination in particular languages have begun appearing (e.g. Manzao 2011, Nuñez-Lagos 2005), with scholarly research particularly active among Romance linguists (Deulofeu 1988, 1999, Montolío 1999, Rodriguez Ramalle 2008),  historical arguments turning on insubordination have been employed to problems in establishing broader relationships of Altaic (Robbeets 2009), and studies of how discourse dependencies are established have become interested in the way interclausal signalling can be coerced to signal relations between larger discourse units (Mithun 2008).

With all this interest, we believe the time is ripe for a symposium dedicated to the topic of insubordination. This will bring together researchers interested in the phenomenon, in a wide range of languages and from a broad range of perspectives.

*Application has been closed.

The symposium is open to public. Please pre-register for the symposium by sending the following information via e-mail to the LingDy Project Administrative Office (lingdy-office[atmark]aacore.net) by October 23 (October 18 if you are interested in attending the reception).

International Workshop: “‘Special Genres’ in and around Indonesia”