To get more information about the lectures, please read here.

No charge for tuition

Prof. Austin is an internationally recognised scholar of the study of Australia Aboriginal languages, Diyari from South Australia in particular; he also carries out research on the Sasak and Samawa languages of the Austronesian family spoken in Eastern Indonesia. Since 2002 he has been actively engaged in research and educational activities on the methodology of language documentation and language revitalisation, morpho-syntactic typology and Lexical-Functional Grammar.

Mr. Nathan is the language co-ordinator, Centre for Australian Languages and Linguistics at the Batchelor Institute for Indigenous Tertiary Education near Darwin. With 20 years experience in educational and computing support for Indigenous and endangered languages, he has developed digital platforms and applications for language research, education and publishing and has taught computing, linguistics, cognitive science, multimedia, and language documentation and archiving. He is a Founding Editor of the open-source digital publisher ‘EL Publishing’, and his own publications include the textbook ‘Australia’s Indigenous Languages’ and papers on archiving, language documentation, audio, multimedia, lexicography, and the internet. He led the development of the Endangered Languages Archive at the University of London, produced multimedia and online educational materials in support of several endangered languages, developed many websites, and was co-author (with Peter K. Austin) of the web’s very first dictionary, for Gamilaraay, NSW.

Dr. Jukes mainly works on languages in Sulawesi, Indonesia. After finishing his PhD thesis on morphosyntax of Makassarese in South Sulawesi, he worked on documentation and description of Toratán (Ratahan) in North Sulawesi as a project under ELDP (2005-2007). He has extensive knowledge and experience in documentation of endangered languages, especially in the areas of audio and video data processing using ELAN.

Dr. Sonja Riesberg received a Ph.D. in 2011 for her study of voice in Western Austronesian languages. She has been investigating Toli-Toli (Totoli), a language spoken in Sulawesi, Indonesia, in the DoBeS programme, which promotes documentation of endangered languages of the world, and has also been doing fieldwork on Papuan languages. Since 2012, she has been a lecturer in several workshops on documentary linguistics held at the State University of Papua. 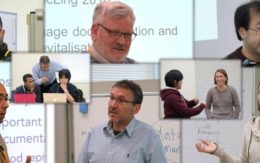